Featured Quote:
As a longtime advocate for religious freedom, I appreciate @POTUS
prioritizing our call to action to fill the important role of Ambassador-at-Large for International Religious Freedom.

U.S. Treasury Secretary Janet Yellen should intervene at the International Monetary Fund to prevent Taliban-led Afghanistan from being able to use almost $500 million in reserves, Republican House members said.

The group of 18 lawmakers, including Arkansas’s French Hill, wrote to Yellen on Tuesday in a letter obtained by Bloomberg News, asking Yellen to take action at the fund and respond to their request by Thursday afternoon. They also called on Yellen to provide more detail on measures being taken at the IMF to make sure the assets, known as special drawing rights, aren’t used in ways that run counter to U.S. national interest.

IMF members approved the creation of a record $650 billion in global reserves this month to help emerging and low-income nations deal with mounting debt and Covid-19. By fund rules, the assets are divided among IMF members roughly proportionally to the size of their economies, which for Afghanistan is 0.07% of the total, or $455 million.

The SDRs are scheduled to be transferred to central banks around the world on Aug. 23.

i
News from Congressman

A ninth generation Arkansan, French Hill is the 22nd Member of Congress to represent central Arkansas in the U.S. House of Representatives. He was elected on November 4, 2014, and began his first congressional term in the 114th Congress on January 3, 2015. He won reelection to serve in the 115th, 116th, and 117th sessions of Congress.

He is a member of the U.S. House Committee on Financial Services where he serves as Ranking Member of the Subcommittee on Housing, Community Development and Insurance. Rep. Hill serves alongside Senator Pat Toomey (R-Pa.), Congresswoman Donna Shalala (D-Fla.) on the Congressional Oversight Commission established by the CARES Act. In 2019, Rep. Hill was selected to be a member of the United States-Mexico-Canada Agreement (USMCA) Republican House Whip Team.

Prior to his congressional service, Rep. Hill was actively engaged in the Arkansas business community for two decades as a commercial banker and investment manager. He was founder, chairman, and chief executive officer of Delta Trust & Banking Corp., which was headquartered in Little Rock and recently merged with Arkansas-based Simmons First National Corp.

Prior to his community banking work in Arkansas, Rep. Hill served as a senior official in the administration of President George H.W. Bush. From 1989 until 1991, Rep. Hill served as Deputy Assistant Secretary of the Treasury for Corporate Finance, where one of his key assignments was representing the United States as a negotiator in the historic bilateral talks with Japan known as the Structural Impediments Initiative (SII).

After the fall of the Berlin Wall, Rep. Hill led the design of U.S. technical assistance to the emerging economies of eastern and central Europe in the areas of banking and securities. In 1991, at the age of 34, President Bush appointed Mr. Hill to be Executive Secretary to the President’s Economic Policy Council (EPC), where he coordinated all White House economic policy. For his leadership and service at the Treasury and the White House, Rep. Hill was awarded the Distinguished Service Award by U.S. Secretary of the Treasury Nicholas Brady in January 1993. Prior to his Executive Branch Service, from 1982 until 1984, Rep. Hill served on the staff of then-U.S. Senator John Tower (R-TX) as well as on the staff of the U.S. Senate Committee on Banking, Housing, & Urban Affairs.

Throughout his career, Rep. Hill has been active in civic affairs. He is a past president of the Rotary Club of Little Rock and served as the 2013 chairman of the Little Rock Regional Chamber of Commerce.

He has received numerous awards and recognition for his long-time support of the Boy Scouts of America, the arts and humanities, tourism, and historic preservation in Arkansas. He is an avid outdoorsman, boy scout, and spends recreational time outside hiking, fishing, and more.

In 2019, Rep. Hill was selected to be a member of the United States-Mexico-Canada Agreement (USMCA) Republican House Whip Team.

He serves on the Japan-United States Friendship Commission, an independent federal government agency established by Congress in 1975.

Congressional Caucus on India and Indian-Americans

American politician
This article is about the politician. For other uses, see French Hill (disambiguation).

James French Hill (born December 5, 1956) is an American businessman and politician serving as the U.S. Representative for Arkansas’s 2nd congressional district since 2015. He is a member of the Republican Party.

Hill was born in Little Rock, Arkansas.[1] He graduated with a Bachelor of Arts degree in economics from Vanderbilt University.[2] He attended the UCLA Anderson Graduate School of Management, where he earned a certified corporate director designation.[3]

From 1982 to 1984, Hill was an aide to Republican Senator John Tower.[1] He was a staffer on the Senate Banking, Housing and Urban Affairs Committee.[1] Hill was executive secretary to President George H. W. Bush’s Economic Policy Council from 1991 to 1993, and Deputy Assistant Secretary of the Treasury for Corporate Finance from 1989 to 1991.[1][4] Hill founded and was CEO and chairman of the Board Delta Trust and Banking Corporation in Little Rock until its acquisition by Simmons Bank in 2014.[5] 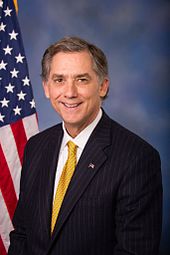 Official portrait for the 114th Congress

Hill was renominated in the Republican primary over Brock Olree of Searcy (White County) and was reelected with 58% of the vote against the Democratic nominee, former Little Rock School District Board President Dianne Curry, and Libertarian nominee Chris Hayes of North Little Rock.[citation needed]

In 2017, Arkansas’s 2nd district was included on the initial list of Republican-held seats targeted by the Democratic Congressional Campaign Committee in 2018.[8] In the November general election, Hill defeated Democratic nominee Clarke Tucker with 52.1% of the vote to Tucker’s 45.8%. Libertarian Joe Swafford received 2%.[9]

Hill ran for another term. Sarah Huckabee Sanders endorsed Hill, speaking at a rally in support of him.[10]

In 2020, the Hill campaign warned that Democratic nominee Joyce Elliott was “as dangerous as they come”.[1] Hill warned that if elected, Elliott would “be a member of the Democratic conference and she’d be a member of the Congressional Black Caucus and her first vote would be for Speaker Pelosi to be the speaker of the House.”[1] In the November general election, Hill defeated Elliott.[11]

Hill has been a member of the U.S. House during the presidencies of Barack Obama, Donald Trump, and Joe Biden. During Trump’s presidency, Hill voted in line with the president’s position 96.8% of the time.[12] At the start of Biden’s presidency, Hill opposed Biden’s decision to cancel the Keystone Pipeline. He said he wanted to work with the Biden administration on policy issues including Iran, free trade, and immigration.[13] As of October 2021, Hill had voted in line with Biden’s stated position 12.5% of the time.[14]

On April 17, 2020, House Minority Leader Kevin McCarthy appointed Hill to the COVID-19 Congressional Oversight Commission to oversee the implementation of the CARES Act.[18]

Hill praised the Trump administration’s handling of the COVID-19 pandemic.[1]

Hill acknowledged Biden’s victory in the 2020 U.S. presidential election, voting to certify the results of the Electoral College and declining to participate in attempts to overturn the election results.[19][20]

In 2020 and 2021, Hill strongly opposed plans by the United States and other nations in the G7 to issue a $650 billion Special Drawing Rights general allocation, calling for a specific and targeted allocation instead.[22]

On May 19, 2021, Hill was one of 35 Republicans who joined all Democrats in voting to approve legislation to establish the January 6, 2021 commission meant to investigate the storming of the U.S. Capitol.[24]

A ninth-generation Arkansan and a Roman Catholic,[30] Hill resides in Little Rock.[1] He and his wife, Martha McKenzie, have two children.[1]