Featured Quote:
Our national parks are iconic treasures. The #VIPAct grants active-duty personnel, veterans, and Gold Star families lifetime access to these lands and monuments. I proudly cosponsored and helped pass this small token of appreciation for our heroes.

ROGERS, Ark. (KNWA/KFTA) — Congressman Steve Womack tours a facility in Rogers on Wednesday, September 1, that produces face masks for people across the country.

Congressman Womack says the facility is a way to bring face mask production back to the US and Northwest Arkansas in particular.

“The demand here is not just the pandemic, but it’s a local company here that is using these masks across the spectrum, across the United States with their associates,” Womack said. “That’s what’s creating the demand for the throughput here.”

The majority of masks produced by Efofex are used by Walmart associates.

i
News from Congressman Steve Womack

Congressman Steve Womack has proudly represented the Third District of Arkansas since his election in 2010. He is currently a senior member of the powerful House Appropriations Committee, where he is the Ranking Member of the Financial Services and General Government (FSGG) Subcommittee and also sits on the Defense and Transportation, Housing and Urban Development (THUD) Subcommittees. He formerly served as the Chairman of the House Budget Committee and has been on the Republican Whip Team since his arrival in Congress.

Womack is committed to ensuring that the voices of his constituents are represented and is widely known in the House for his perfect voting record. During his tenure, he has never missed a vote and holds the longest consecutive voting streak maintained by any current member of the U.S. House of Representatives. In his first four terms, while serving in the majority, Womack was the leadership’s go-to member in presiding over the House floor. There’s no better validation of his experience than when then-Speaker Paul Ryan asked him to preside over the 2016 Republican National Convention during the contentious rules vote. Womack was also tapped by Speaker Ryan to lead the 2018 16-member, bipartisan, bicameral Joint Select Committee on Budget and Appropriations Process Reform.

Womack has a strong record of public service to the Natural State, which has been defined by a lifelong philosophy to “lead by example and lead from the front.” As the former Mayor of Rogers, he is credited with leading an unprecedented expansion of the Rogers economy with more than $1 billion in local investment.

Womack retired from the Arkansas Army National Guard in 2009 at the rank of Colonel with more than thirty years of service. His deployment to Sinai, Egypt in 2002 marked the first time a National Guard unit performed the mission of the Multinational Force and Observers. Womack’s Task Force received accolades from the highest levels of military and civilian leaders.

Womack is a graduate of Arkansas Tech University where he was inducted into the ATU Hall of Distinction in 2014. He is a member of the Arkansas National Guard’s OCS Hall of Fame. His military awards include the Legion of Merit, the Arkansas Distinguished Service Medal, and, in 2015, Womack was presented with the Harry S. Truman Award, the highest award given by the National Guard Bureau.

He also serves as the Chairman of the West Point Board of Visitors (BOV), where he supports the U.S. Military Academy – the nation’s preeminent leadership development institution – in its mission to train the next generation of Army officers. He was first appointed to the BOV in 2012 and subsequently elected BOV Chairman in 2017. Womack is currently the only congressional representative from Arkansas to serve on the board.

He and his wife, Terri, have been married for 36 years. They have three sons and three grandsons.

They make their home in Rogers.

Stephen Allen Womack[1] (/ˈwoʊˌmæk/ WOH-mack; born February 18, 1957) is an American politician serving as the U.S. Representative for Arkansas’s 3rd congressional district since 2011. The district, which was once represented by future Senator J. William Fulbright, covers much of northwestern Arkansas, including Fort Smith, Fayetteville, Springdale, and Womack’s hometown of Rogers. A member of the Republican Party, Womack was mayor of Rogers before his election to Congress. 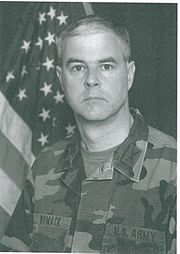 Steve Womack as an Army National Guard lieutenant colonel in 2002

Womack was born in Russellville, Arkansas, the son of Elisabeth F. (Canerday) and James Kermit Womack.[2] He spent most of his childhood in Moberly, Missouri, but moved back to Russellville at age 16 and graduated from Russellville High School in 1975. He graduated from Arkansas Tech University in 1979. Shortly afterward, he enlisted in the Arkansas Army National Guard. He served for 30 years, retiring in 2009 as a colonel. Womack’s father founded KURM-AM in 1979, and Womack served as station manager from 1979 to 1990. He then served as executive officer of the Army ROTC program at the University of Arkansas from 1990 to 1996, then joined Merrill Lynch as a financial consultant.

In 1998, Womack was elected mayor of Rogers, holding the post for 12 years.[3] During his mayoralty, Womack sought to crack down on illegal immigration by assigning two Immigration and Naturalization Service agents to the Rogers Police Department.[4] As a result, the Mexican American Legal Defense and Educational Fund filed a class-action suit against the city’s police force, accusing it of racial profiling.[5]

In late 2009, Womack jumped into the race for the 3rd District after incumbent Representative John Boozman announced that he would run for the United States Senate. The 3rd is one of the most Republican districts in the South and the nation (Republicans have held it since 1967), and it was generally believed that whoever won the Republican primary would be the district’s next representative. Womack ranked first in the seven-candidate primary with 31% of the vote.[7] In the June runoff, he defeated State Senator and fellow Rogers resident Cecile Bledsoe, 52%-48%.[8]

Womack was originally set to face veteran Ken Aden in his reelection bid, but Aden withdrew from the race on July 8, after admitting to exaggerating his military record. As it was too late to select a replacement candidate for Aden (under Arkansas law, the Democratic Party could only name a replacement at that date if the original candidate died, moved out of the district or opted to seek another office), Womack faced no major-party opposition in November.[10] He was reelected with 76% of the vote.[11] 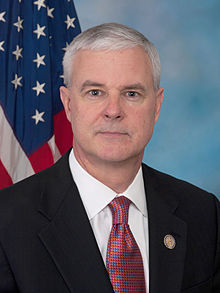 In 2010, Womack signed a pledge sponsored by Americans for Prosperity promising to vote against any global warming legislation that would raise taxes.[12]

Womack was a member of the House Appropriations Committee when in 2014[13] lawmakers inserted a prohibition into an appropriations bill that would prevent USDA staff from working on finishing regulations related to the meat industry.[14]

In a 2015 episode of his show Last Week Tonight with John Oliver, John Oliver criticized Womack for blocking the enforcement of laws proposed by the Grain Inspection, Packers and Stockyards Administration that were designed to protect chicken farmers from being threatened or punished by the companies they work for if they spoke out regarding their farming experiences.[15]

On May 19, 2021, Womack was one of 35 Republicans to join all 217 Democrats present in voting to approve legislation to establish the January 6 commission meant to investigate the storming of the U.S. Capitol.[19][20][21]

Womack’s son, James Phillip Womack, was sentenced to nine years in prison on felony gun and drug charges in April 2019.[26]