The State government of Arkansas is divided into three branches: executive, legislative and judicial. These consist of the state governor’s office, a bicameral state legislature known as the Arkansas General Assembly, and a state court system. The Arkansas Constitution delineates the structure and function of the state government. Since 1963, Arkansas has had four seats in the U.S. House of Representatives. Like all other states, it has two seats in the U.S. Senate.

The State government of Arkansas is divided into three branches: executive, legislative and judicial. These consist of the state governor’s office, a bicameral state legislature known as the Arkansas General Assembly, and a state court system. The Arkansas Constitution delineates the structure and function of the state government. Since 1963, Arkansas has had four seats in the U.S. House of Representatives. Like all other states, it has two seats in the U.S. Senate.

Reflecting the state’s large evangelical population, the state has a strong socially conservative bent. The 1874 Arkansas Constitution established this as a right to work state (a provision then directed against union organizers), in the 21st century its voters passed a ban on same-sex marriage with 75% voting yes, and the state is one of a handful with legislation on its books banning abortion in the event Roe v. Wade (1973) is overturned.

Since the late 19th century, Southern Democrats of Arkansas have traditionally had an overwhelming majority of registered voters in the state. At that time, they consolidated their power and achieved effective disfranchisement of African Americans (and Republican) voters by passage of the Election Law of 1891 and a poll tax amendment in 1892, which also dropped many poor white Democrats from the rolls. Together these also suppressed the coalition of Republican and farmer-labor parties, which had threatened the Democrats. Assessing fees to register and vote resulted in many poor people being dropped from voter rolls. The Election Law set up secret ballots and standardized ballots in progressive reforms that also made voting more complicated and effectively closed out illiterate voters. It set up a state election board and officials, putting power into the hands of the Democratic Party, rather than county workers. Voter rolls declined for both black and white voters. By 1895, there were no longer any African-American representatives in the state house.[1] African Americans were closed out of the political system for decades.

In the 20th and 21st centuries, Arkansas Democrats have tended to be more conservative than their national counterparts, particularly in areas outside metropolitan Little Rock. Traditionally having strength in most areas outside the Northwest and North Central parts of the state, in the 21st century Democrats in Arkansas predominate along the Mississippi River in the East, in central Little Rock, and around Pine Bluff and the areas south of there along the Louisiana border.

Historically Republicans in the state were based in the northwestern areas, long a supporter of the Unionist cause in the Civil War. These were areas of yeomen farmers in the antebellum years. Planters and major slaveholders lived in the Delta area along the Mississippi River and tended to ally with the Democratic Party. As noted above, disenfranchisement of African Americans and consolidation of power by the Democrats left the Republicans nearly powerless. They concentrated on developing patronage positions.[2]

In 1966, Republican John Paul Hammerschmidt won a U.S. House seat from this northwestern area, the first Republican from Arkansas to be elected to Congress since after Reconstruction.[2] He held the seat until 1992, when he retired. What was more surprising, that year multi-millionaire Winthrop Rockefeller was elected to the governorship. A 1950s migrant from New York, he was joined by Republican Maurice “Footsie” Britt, a World War II hero elected as lieutenant governor. Unlike in other parts of the South at the time, Rockefeller’s coalition was based on “progressive Democrats and newly enfranchised black voters.” They also elected him in 1968. Rockefeller faced resistance from the conservative Democratic legislature. In 1970 the Democrats put up their own progressive candidate and defeated Rockefeller. Rockefeller died in 1973, which weakened the emerging Republican Party. It was 1978 before Ed Bethune was elected to Congress as the second Republican from the state; he served three terms from central Arkansas.[2]

It was not until the late 20th century that more white conservatives in Arkansas began to shift from the Democratic to the Republican Party. In 1989 Democratic Congressman Tommy Robinson announced his shift to the Republican Party, an indication of change.[2] The party continues to be strongest in the northwestern part of the state, due to historic conditions of that area, particularly in Fort Smith and Bentonville, as well as North Central Arkansas around the Mountain Home area. In the latter area, Republicans have been known to get 90 percent or more of the vote.

While the rest of the state used to be more Democratic, since the late 20th century Republicans have attracted members from the Little Rock suburbs, the southwest (especially Texarkana), and the northeast around Jonesboro. Tim Hutchinson, elected in 1996, was the first Republican U.S. Senator from Arkansas since Reconstruction. As an indication of increasing Republican strength in the state, in 2008, Republican nominee John McCain defeated Democratic nominee Barack Obama by 19.9%, the largest margin of victory for a candidate in Arkansas since 1984 despite McCain losing nationally. Shortly after this, Republicans John Boozman and Tom Cotton were elected to the U.S. Senate in 2010 and 2014 respectively, giving the state all-Republican representation in the Senate.

Arkansas Governor Bill Clinton, a Democrat, was elected President of the United States candidate in 1992, and was reelected in 1996. In the former election, the state was the only one in the nation to give majority support to Clinton. However, the state has voted Republican by increasing margins in every presidential election in the 21st century.

The state voted for John McCain in 2008 by a margin of 20 percentage points, making it one of the few states in the country to vote more Republican that year than it had in 2004. (The others were Louisiana, Tennessee, Oklahoma and West Virginia.)[4]

As in the national government of the United States, political power in Arkansas is divided into three main branches: Executive, Legislative, and Judicial.

Each officer’s term is four years long. Office holders are term-limited to two full terms plus any partial terms before the first full term. Arkansas governors served two-year terms until a referendum lengthened the term to four years, effective with the 1986 general election. Statewide elections are held two years after presidential elections.

Some of Arkansas’s counties have two county seats, as opposed to the usual one seat. The arrangement dates back to when travel was extremely difficult in the state. The seats are usually on opposite sides of the county to serve residents within easier traveling distances. Although travel conditions have improved, there are few efforts to eliminate the two seat arrangement where it exists, since the county seat is a source of pride (and jobs) to the cities involved.

Arkansas is the only state to specify by law the pronunciation of its name (AR-kan-saw).[a]

Article 19 (Miscellaneous Provisions), Item 1 in the Arkansas Constitution is entitled “Atheists disqualified from holding office or testifying as witness,” and states that “No person who denies the being of a God shall hold any office in the civil departments of this State, nor be competent to testify as a witness in any Court.” In 1961, the United States Supreme Court in Torcaso v. Watkins (1961), held that a similar requirement in Maryland was unenforceable because it violated the First and Fourteenth Amendments to the US Constitution. The latter amendment, per current precedent, makes the federal Bill of Rights binding on the states. As a result, this ‘religious test’ provision has not been enforced in modern times. It would be overturned if challenged in court.

The daily administration of the state’s laws are carried out by the chief executive—the Governor, and their second in command the Lieutenant Governor, the Secretary Of State, the Attorney General, the Commissioner of State Lands, the State Treasurer, the State Auditor, and by the staff and employees of the 15 executive branch departments.

In Arkansas, the lieutenant governor is elected separately from the governor and can be from a different political party.[9]

Following reorganization in 2019, state government is subdivided into fifteen departments, each led by a cabinet-level official (titled secretary):

The Arkansas General Assembly is the state’s bicameral bodies of legislators, composed of the Senate and House of Representatives. Elections in the Arkansas Senate are staggered such that half the body is up for re-election every two years. Since the late 20th century, the Senate has 35 members from districts of approximately equal population. These districts are redrawn decennially with each US census. The entire state senate was up for reelection in 2012. Arkansas voters elected a 21-14 Republican majority in the Senate.

House districts are redistricted by the Arkansas Board of Apportionment. Following the 2012 elections, Republicans gained a 51-49 majority in the House of Representatives.[10]

The Republican Party majority status in the Arkansas State House of Representatives following the 2012 elections is the party’s first since 1874 during the Reconstruction era. Democrats regained control of the state house and suppressed black and Republican voters. At the turn of the century, the legislature passed a new constitution and laws disenfranchising most African Americans and establishing Jim Crow. African Americans were closed out of the political system for many decades. The shift of white conservatives from the Democratic to the Republican Party took place more gradually in Arkansas than some southern states. It was 2012 before the Republican Party re-established control of the state legislature.[11]

Composition of the Arkansas legislature

Arkansas’s legislature is controlled by the Republican Party, which gained the majority in both houses following the 2012 general election.

The Arkansas House of Representatives 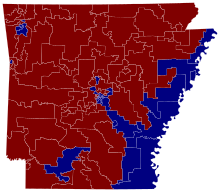 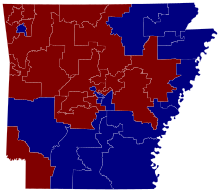 The Arkansas Supreme Court was established in 1836 by the Arkansas Constitution as the court of last resort in the state. It is composed of seven justices elected to eight-year terms. The court’s decisions can be appealed only to the Supreme Court of the United States. 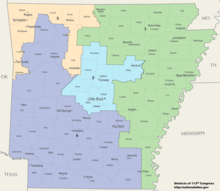 Gallery of members of U.S. Senate

Gallery of members of U.S. House of Representatives